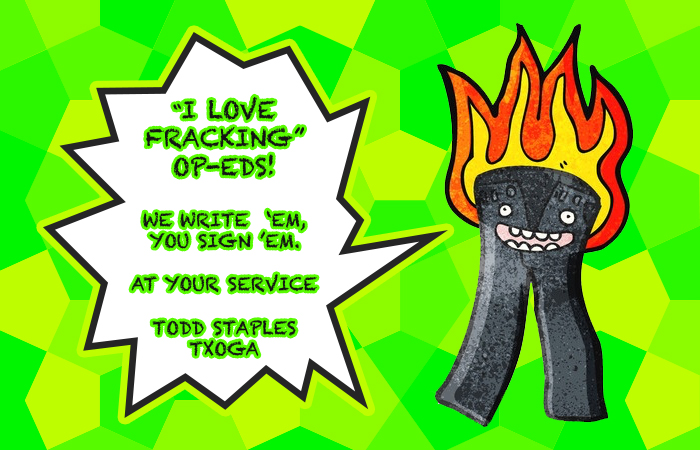 Random thoughts about fracking updates I think are important:

Poor Encana. They lost $197k for the 138,000 gallons of oil spewed over 1000 acres during the blowout. Aerial photos show where that oil ended up. Source

Encana reported that the oil rig accident released tens of thousands of pounds of 18 different types of gases as well as 760,956 pounds of crude oil into the air.

Based on the specific gravity of the crude oil, the amount released into the air is equal to approximately 3,293 barrels of oil, which at the current market price of $60 a barrel would have been worth $197,580.  Source

UPDATE: See the TCEQ report on what was released in the blowout. It’s reporter in pounds. Example: Toluene – 649.16 lbs., Benzene – 203.82 lbs. And those are some of the lowest amounts releases.

Need an “I love fracking” op-ed? Todd Staples and TXOGA are at your service.

In the opinion piece, versions of which have appeared in at least seven newspapers, including the San Antonio Express-News and theAmerican-Statesman, officials from Karnes City, Pleasanton, Midland and Lubbock argue that, with the recently signed law, “lawmakers got it right by relying on fact-based information to develop a balanced solution for Texas.”

It’s “a practice we vigorously discourage, although I suspect it sometimes happens,” said Kate Riley, who is the Seattle Times editorial page editor and who has served as vice president of the Association of Opinion Journalists. Statesman

.@asherprice HB40 does not clarify the state’s “exclusive” jurisdiction over #fracking. It destroys 100 years of CONCURRENT jurisdiction.

How to ever untangle the utter mess the media made of this? Way to be fracking industry stenographers! The most important takeaway:

The most important thing about the @EPA #fracking study: They can never again say there are no documented cases of #water contamination. — TXsharon (@TXsharon) June 10, 2015

From the Department of DUH: You won’t find “widespread” contamination unless you do widespread testing.

This is about a 20 minute Josh Fox interview explaining what happened with the EPA fracking study.