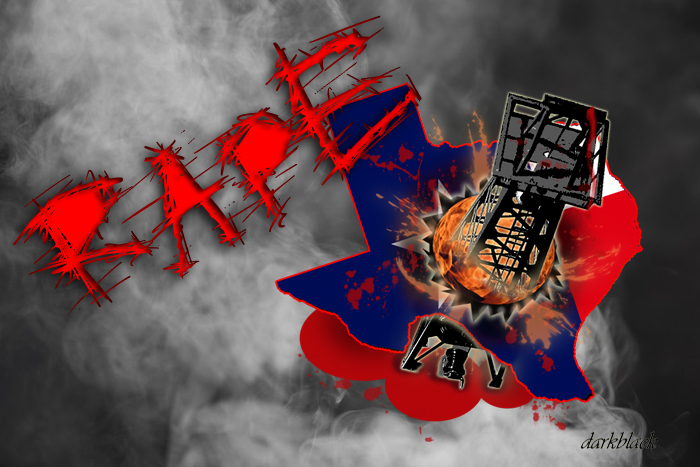 I was told by someone that the imagery and text in this post might need a Trigger Warning. I didn’t know what that was so I looked it up. Some psychologists are concerned with the use of trigger warnings as avoidance and others feel the trigger warning is a trigger.

The imagery is my logo that I have used since 2009 [started the blog in 04 got the logo on 09]. To me, it perfectly depicts what is happening in Texas. but your mileage may vary (YMMV) People wear t-shirts with this imagery and I intend to continue using it. Having been a victim, I understand it’s about power. Fracking victims I have worked with describe it as a rape. It is a violation of justice and it is despoiling the land. Victims usually suffer PTSD.

UPDATE: Since I wrote this, three additional people have contacted me describing their experience with the oil and gas industry as feeling raped. None of them knew about this post. One was a man.

The oil & gas industry THROUGH our elected officials are shoving fracking down the throats of Texans. HB 40 leaves Texans feeling powerless with no ability to feel safe in their own homes. They are left dehumanized and completely helpless against the powerful oil & gas industry because they are in the way of profits. If feeling helpless to protect yourself against power is not a form of rape, what is?

Substitute language for HB 40 was released today but there is no real improvement.

These Texas Senators voted to STRIP control away from Texans.

HB 40, passed out of committee today on a 10-1 vote. Only Rafael Anchia voted against. Gene Wu voted present.

At bidding of oil and gas industry, state’s long-held tradition of local control on track to be reversed.

At bidding of oil and gas industry, state’s long-held tradition of local control on track to be reversed

Austin, TX – Today the Texas State House Energy Resources Committee approved a controversial measure that guts the rights of communities to protect themselves from impacts of oil and gas operations within their borders. Ignoring objections from cities around the state, Committee members approved the Committee Substitute for HB40. Rep Anchia voted against, Rep Wu voted present, all others members attending voted for.

The bill was introduced in direct response to an ordinance approved by the citizens in Denton, TX, in November 2014 to ban hydraulic fracturing (“fracking”) within city limits. CSHB 40 not only reverses the results of that election but also attacks the longstanding rights of every town and city in the state that has passed an oil and gas ordinance. Although the Committee Substitute makes small changes to the original HB40 that give more weight to ordinances passed 5+ years ago, all existing and future local oil and gas ordinances would still have to meet with state approval. The Denton fracking ban would be legislatively overturned, along with other relatively strong city ordinances.

“In the past, towns have been able to decide for themselves whether they wanted drilling operations next to homes, day care centers, churches, or hospitals. Not anymore. Politicians in Austin think they know better than us what’s good for our towns. That’s just not right,” said Denton Drilling Awareness Group President Cathy McMullen.

Texas has had one of the country’s longest standing traditions of local control over oil and gas land use, and cities throughout the state have adopted setback requirements to create buffer zones between drilling rigs and homes, schools, parks, and hospitals.

“Our state Legislators talk a good game when it comes to cracking down on ‘big government,’ but this law flies in the face of everything they supposedly believe. The politicians in Austin just told every town in Texas, ‘we know better than you what’s right for your town.’ And all because the oil and gas industry got mad that people in Denton decided to stand up for themselves,” said Sharon Wilson, Texas-based organizer with Earthworks.

The City of Denton is fighting a lawsuit brought against it by the oil and gas industry over its ordinance. Until today, attorneys for the city felt fairly confident their ordinance would stand. The Denton Drilling Awareness Group and Earthworks have intervened in the case in support of the city.

“It looks like the Texas House Energy Resources Committee does not want the case to reach the court. The Committee has taken matters into their own hands, capitulating to the greedy but powerful oil and gas industry at the expense of their own constituents’ health and well-being,” said Earthjustice attorney Deborah Goldberg, who is co-counsel for the citizen groups and successfully defended the town of Dryden, NY, in a similar court case. The law firm of Brown and Hofmeister is local counsel for the groups.

“The people of Denton exercised their democratic right to keep a risky industrial process out of their community—and now big oil and their friends in high places are trying to take it away,” said Daniel Raichel, attorney at the Natural Resources Defense Council and co-counsel for the groups. “The interests of a powerful industry should never take priority over the health and safety of American families. Texans should be able to keep dangerous activities and chemicals away from their homes, schools, and hospitals—just as hundreds of other communities across the country have already done.”

***
Earthworks is dedicated to protecting communities and the environment from the adverse impacts of mineral and energy development while seeking sustainable solutions.