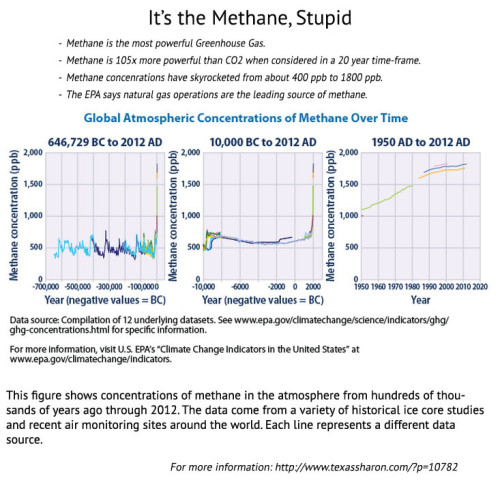 UPDATE: The Intergovernmental Panel on Climate Change (IPCC) reports that methane (CH4) is far more potent a greenhouse gas than we had previously realized.

The IPCC reports that, over a 20-year time frame, methane has a global warming potential of 86 compared to CO2, up from its previous estimate of 72. [update: IPCC latest report says methane is over 86 X more potent than CO2] Given that we are approaching real,  irreversible tipping points in the climate system, climate studies should, at the very least, include analyses that use this 20-year time horizon.

For a larger version of this graphic to distribute click HERE.

Update: I’m pasting the original post below because I know how hard it is to click to something else.

I might have mentioned the recent news that the EPA reduced their estimates of methane emissions but now I have even more and better information. This is the information that needs to be reported.

(1) What we know for a fact is that methane concentrations in the atmosphere are skyrocketing.

The EPA has some graphs that show the dramatic spike.  Go  to this website and then specifically to these figures. At the end of this post are the scientific references the EPA used for this information.

As the charts show, for about 1 million years, methane levels were always between 400 and 800 ppb. Then, all of sudden at the time of the industrial revolution (1850)  when we started big time use of fossil fuels, levels of methane (and CO2) started to climb like crazy.

Today concentrations are over 1800 ppb, which means that we have essentially tripled (x3) the average concentration going back a million years.

Whether the leakage rate is 0.1%, 1%, 3%, 10%, doesn’t matter. As an analogy, think about people that are 400 pounds and really obese and suffering from heart disease. Whether they gain another 0.1, 1, 3, or 10 pounds every month moving forward doesn’t matter. Its the wrong question. They need to lose weight, not keep gaining. Translation: we need to stop poking holes in the earth to let the methane out, stop burning fossil fuels, and let nature over time bring the concentration of methane back to the 400 to 800 ppb range.

(2) How much EPA (or EDF, or UT, or NOAA, or UColorado, or anyone else) “estimates” is irrelevant given how much is already in the atmosphere–TOO MUCH. We know how much is actually in the air. 1800 ppb. 3 times what it should be.

(3) There are hundreds of thousands of wells, tanks, pipelines, meters, compressors, pumps, flares, etc, all over Texas, OK, LA, and the gulf that have never been tested for methane leaking. The high majority were installed well before the more modern stuff went in the last 10 years in the shale formations, including in the 1950’s, 60’s, and 70’s. . Methane leakage rates from any piece of equipment vary with time. They will vary with place. They will vary with the operator.

And then there are the brand new facilities like the one in the video below, like the ones all over the Eagle Ford Shale and all over the Barnett Shale just adding the Permian Basin because OMG! that vent the methane. They do it because they can.

(4) The EPA still says natural gas operations are the leading source of methane.

For even more information that was missed in the AP story see Meleah Geertsma’s Blog: EPA Report Confirms Oil and Gas Sector is Among Nation’s Worst Climate Polluters.

UPDATE 2: New study from NASA 2018: 68% of the global spike in methane is from oil and gas. The global methane spike coincides exactly with the fracking boom.

UPDATE 1: Dory found the EPA report that was omitted in the AP story and connected some dots to the fracking “Echo Chamber.”

To understand methane’s Global Warming Potential (GWP) see: What do leeches have to do with fracking and climate change?