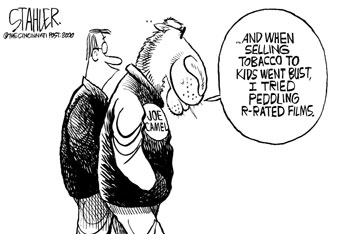 I remember when Tom Shepstone, head camel in the fracking industry’s Joe Camel advertising campaign came after Deborah Rogers calling her a “goat farmer.” I knew then that Shepstone had just fallen neck deep into his own pile of camel dung.

Energy in Depth (EID), a public relations entity formed and funded by the oil and gas industry, made the following statement:

“…all one has to do is look at the evidence…where the ultimate recoveries of wells are increasing each year through better technology and production management[emphasis mine], to see the truth she is intent on denying.”

This statement was in response to my presentations on shale gas economics. Unfortunately, this is yet another of EID’s many prognostications that have no basis in reality or fact. It is mere spin. And the latest numbers from the U.S. Geological Survey (USGS) confirm this

As Rogers points out in her latest article, USGS Releases Damning EUR’s For Shale, it’s getting harder to hide the truth about shale plays. The shale game as Rogers pointed out long ago, is a shell game or ponzi scheme aided by Wall Street and bankers.

How far will EID go to serve their masters the Fracking mafia?

In an article published yesterday, EID says these PEOPLE are an infestation of misinformed antis,
following Josh Fox like sheep. http://eidmarcellus.org/marcellus-shale/josh-fox-out-of-his-den-and-roaming-albany/

Of course, EID had the sense changed that post after they got called on it, so it now says “invasion.”

Three days after EID suggested that “Antis” were moles which should be “whacked”,
http://eidmarcellus.org/marcellus-shale/conflict-of-interest-the-latest-natural-gas-mole/

I’ve been threatened with violence a number of times.

Your starting to annoy me Sharon….maybe a “cease & desist” order is in store for you and your lovelies……..more likely a restraining order. We do not want to take this to the other level…….like they do in Chicago……..

I’ve also had my employment threatened, been called names, had neighbors and friends turned against me, been stalked and my personal information has been shared on the internet and I have been harassed, dragged into court and threatened with legal action.

The fracking mafia is spending billions on lobbying, propaganda, advertising campaigns, harassment, and intimidation to “whack” an opposition that would not exist if they could operate in a more responsible manner.  Since it would be much cheaper to operate responsibly, the only conclusion I can draw is that responsible fracking is not possible.