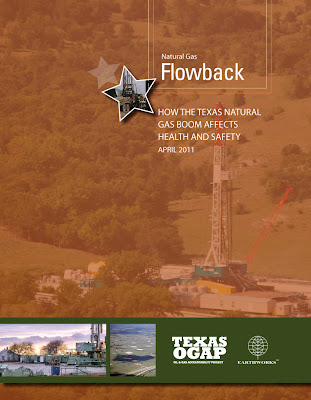 The Dark Side of the Boom:
How Natural Gas Drilling in Texas Threatens Public Health and Safety
Sen. Lon Burnam Joins Calling for ‘Urgent’ Reforms

AUSTIN, TX, APRIL 14 – State, local and federal officials and regulatory agencies are failing to protect Texans from the health and safety risks of the natural gas boom, according to a report released today by the Texas Oil & Gas Accountability Project (OGAP).

State Rep. Lon Burnam of Fort Worth joined OGAP, other state advocacy organizations and community groups in releasing Flowback: How the Texas Natural Gas Boom Affects Health and Safety. The report, available online at bit.ly/TXOGAP-flowback, finds that authorities either lack the resources to deal with the air pollution, water contamination and other problems that accompany natural gas production; are limited in their response by inadequate laws and regulations, or continue the long Texas tradition of favoring the oil and gas industry at the expense of citizens.

The report gives voice to the families and communities on the front lines of a public health crisis that is spreading from the Barnett Shale region in North Central Texas to other parts of the state. It pulls together for the first time detailed results of air and water testing as well as health effects data linking residents’ symptoms to toxic chemicals used in drilling and hydraulic fracturing (“fracking”).

Flowback roundly criticizes the inadequacy of policies and the response of authorities at all levels of government, but reserves its sharpest criticism for the Texas Railroad Commission: “long the oil and gas industry’s lapdog, (the commission) must become a watchdog.” The state Sunset Commission recently recommended the complete restructuring of the Railroad Commission because of conflicts of interest with the industry.

“We want to lift the veil of denial that hangs over the gas patch,” said Sharon Wilson, organizer for Texas OGAP. “The reports of health and safety effects across two dozen counties are real, not coincidences or isolated examples. Current laws make it hard to tie a specific illness to a specific well, but residents of these communities know that where drilling goes, problems follow.”

Burnam is among state lawmakers trying to address the problems, as the author of bills to prohibit gas wells within 1,200 feet of schools and to reduce air pollution by requiring vapor-recovery units on wells in the Barnett Shale. The report welcomes those efforts but says broader reforms are needed, including:

• As the Sunset Commission recommends, the Texas Railroad Commission – whose members currently are elected, often with hefty campaign contributions from the oil and gas industry – should be replaced with an appointed commission that puts the health and safety of Texans first. The new commission should require full public disclosure of drilling and fracking chemicals on a well-by-well basis.

• The Texas Water Development Board must evaluate the impact that hydraulic fracturing, which uses hundreds of thousands of gallons of water for each injection.

• The U.S. Environmental Protection Agency should identify sources of drilling chemicals in groundwater and regulate air pollution from oil and gas exploration and production.