Today, House Republicans will introduce legislation they plan to rush through that will ban the EPA from regulating greenhouse gases under the clean air act.

The officials said the bill would nullify all of the steps the EPA has taken to date on the issue, including a threshold finding that greenhouse gases constitute a danger to the public health and welfare.

In addition, it seeks to strip the agency of its authority to use the law in any future attempts to crack down on the emissions from factories, utilities and other stationary sources. LINK

I warned you about the Republican attack on the EPA. Newt Gingrich, the darling of the GOP, wants to completely abolish the EPA.

Of course, the Big Gas Mafia is behind it all and the GOP is only doing what they were paid to do by their masters. The Gas Mafia can not dare to allow the GOP to quantify how much methane they are allowing to escape into our air. That would cause the “bridge” to collapse and ruin their scheme.

Ramon notes the irony (click over for links and the full release):

I find it ironic that the industry that touts itself as the “low-carbon” fossil fuel is fighting efforts to require disclosure of its global warming pollution.

The Billionaire Koch Brothers, serial polluters and despisers of clean air, had a GOP planning session recently to figure out more ways to wreck havoc on democracy and trick the poor Tea Partiers into helping them become ever more wealthy by not paying for their polluting ways.

About 200 key figures in business, energy, the media and law were expected to assemble at a five-star hotel at the invitation of the Koch brothers for the latest of their twice-yearly discussion groups on how to forward their libertarian causes. The talks began at 1pm with sessions that focused on how to fight the Obama administration, which the Kochs see as a threat to the free market and unfettered wealth.

Greenpeace sent them a welcome message: 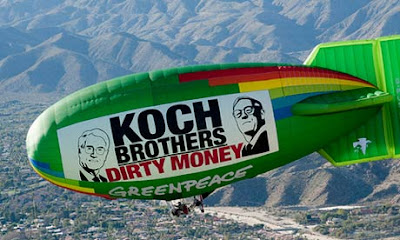 The Koch brothers run the second largest privately-owned company in the US, Koch Industries, which has stakes in oil and other energy industries, paper and pulp and chemicals, among other concerns. They are accused by detractors of increasingly using both their combined wealth – put at $35bn (£22bn) – and the wealth of their friends and fellow billionaires brought together at their gatherings, to distort the democratic process through huge campaign donations.

Think Progress has a list of the attendees. I know you will be shocked to see how many of the names have “natural gas” by them and that they are listed along side such highly esteemed figures as Glenn Beck.