The Big Gas Mafia can’t win if we know the truth and if we stick together. Their sleazy, underhanded tactics cannot intimidate us, or silence us, or divide our communities unless we allow it. Divide and conquer is their favorite method of intimidation.

This week they sent out invitations to a Grand Prairie community with a warning:

Your future royalty payments are in jeopardy! 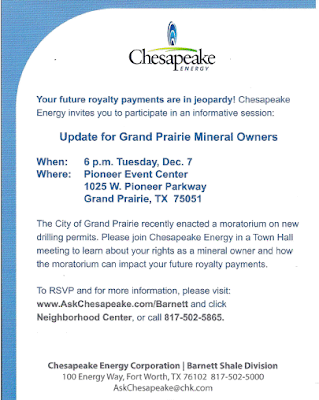 They are appealing to your greed and they want you to believe it’s your neighbors’ fault that you don’t have mailbox money. Your neighbors–who won’t sign leases and who advocated for a moratorium on new permits until they have better regulations that protect public health–are keeping you from getting rich.

The Chesapeake Gas Mafia leads people to believe they can have great wealth by leasing their minerals. They grossly exaggerate the promise of royalty payments. The only ones getting wealthy off shale drilling are the Big Gas Mafia executives and people who own large tracts of land.

If you live in a neighborhood, the average royalty payment is $35 per month. Reality has not measured up to their promises. Their high pressure tactics get the leases signed then they drill the first well. That will hold the lease by production and as long as there is production, they don’t have to drill another well in the pool. The objective is to move on and get more pools held by production. If they do drill another well it may be years after the first one and then you might get $70 per month. More likely, the production on the first well will decrease, as is the norm for Barnett Shale wells, and you will never receive more than $35 per month.

Is $35 per month worth ruining your property value, your serenity, your health and your relationship with your neighbors? Really? $35 per month? That’s just pathetic. That’s despicable!

Tuesday night they will send their most highly skilled professional liars who graduated at the top of their Professional Liar Charm School. They will tell you what “Good Neighbors” they are unlike all those other operators out there. (The ALL say that.) Does this video look like Chesapeake is a good neighbor?

Ask Fort Worth about their good neighborly actions and the lies they told. Here’s an example:

Then they will appeal to your patriotism by saying drilling is making us more secure because we will be energy independent. The only way for us to be energy independent is to get off fossil fuels! They don’t care about our national security or they wouldn’t be shipping our national security to China. Aubrey McClendon, Chesapeake CEO, plans to export the cheap gas overseas for a huge profit.

Think hard about this attempt to manipulate you. Think with your head not your greed. 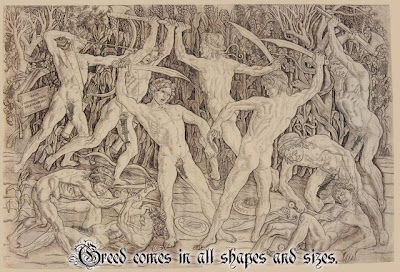 UPDATE: Watch this video! It confirms all the above. Fracking and Factory Farms.