This is not the first case of Barnett Shale water contaminated from the hydraulic fracturing process.

Amber Smith no longer takes soaking baths, one of the young mother’s favorite ways to unwind at the end of the day. 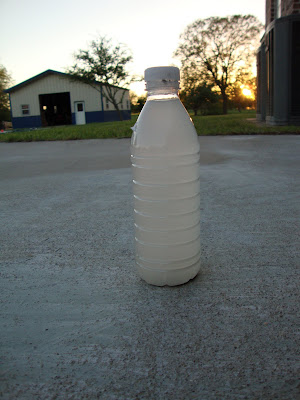 Amber should call Runner Susan. In Bartonville you can take a soaking, oily bubble bath without using any bath products.

The Smith’s water was contaminated shortly after Devon fracked several wells near their home.

The water well owned by the Smith family shows levels of arsenic at 7.5 times the acceptable level for drinking water. The water also contained lead at levels that were 21 times above the acceptable levels, and chromium at more that double the allowable limits. Independent testing shows elevated levels of butanone, acetone, carbon disulfide, strontium, as well as heavy metals, all above safe drinking water standards. The town is awaiting additional test results.

UPDATE: Water issues are a huge concern for North Texans. In 2009, Barnett Shale drillers used Barnett Shale drilling used more than 1,146,598,272.73 gallons of water from Trinity Aquifer from the metered sources alone. This past May was one of the warmest and driest on record which means North Texans are thinking more and more about water.

42% of Williams Petroleum Shareholders back disclosure of hydraulic fracturing chemicals. I wonder how those shareholders would feel to learn that Williams plays dumb when water recycling is suggested.

Even in the driest areas of Texas, it seems oil & gas are prized over water. Range Resources is drilling a second well on the historic Chapman Ranch in South Texas where water is extremely scarce. (hat tip to Cathy)

The bottom line here is that we have no time to waste! Drillers need to Drill-Right Texas or don’t drill at all.