The foreman at the Range Resources Barnett Shale drill site, which is right across the street from a neighborhood, McKenna Park and the hospital, has just confirmed to the city that they had a spill of drilling mud.

An email from a resident:

At 1845 I contacted Justin Devfinney with wastewater collections for the city of Denton. A message was left on his voice mail regarding possible illegal dumping of sewage by Range Resources employees from travel trailers parked on site at northwest corner of Bonnie Brae and Scripture. The odor and drainage is on the west sound barrier wall at the north end. 7:02 pm I received a call back from Justin Devinney who stated his crew was on site at the Range Resource gas well at Rayzor Ranch to investigate dumping of sewage and they were told by the foreman of the site the drainage I saw was from a drilling mud spill and they were working on cleaning it up.

A toxic waste spill must be reported as soon as it occurs to regulatory agency. I am contacting the appropriate agencies regarding this violation of the law by Range Resources.

If you remember, drilling mud was the first spill Aruba Petroleum had at the Ruggiero place. Here’s what was in that drilling mud. 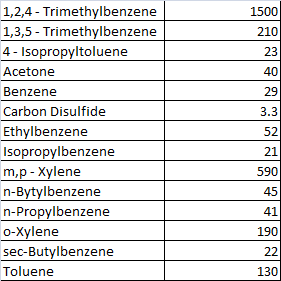 I was at the Range site right after work because from way over on N. Elm I could see the gray haze hanging in the air around the rig. So I drove over there and saw the diesel fumes belching out and covering the sky.

While I was there, a friend wanted to show me this mysterious liquid that was leaking out the back of the drilling area and into the field. The liquid was not black like drilling mud and it was not mud, it was liquid. It smelled like sewage. We also noted that there are no sewage collection tanks on the site. I have some video and so does my friend. We’ll have the video up later.

UPDATE: It was just reported that someone is covering up the evidence cleaning up the sewage spill drilling mud spill with a bulldozer.

UPDATE 2: The Texas Railroad Commission has confirmed that Range Resources has not, as of 8:31 PM reported a spill of any kind as required by law.

UPDATE 3: So, in answering the complaint about the possible illegal dumping of sewage, the city–instead of investigating first–went straight to the drilling foreman and asked him about the liquid pools that were outside the barrier. If that sounds familiar, it’s because you’ve been reading this blog for a while.

I have questions:
How did the drilling mud get “spilled” outside the barrier on the furthermost side away from the rig without “spilling” any inside the barrier? Is that some kind of new physics?

UPDATE 4: You might notice in this video that there is a space that has been washed out under the barrier. I’m thinking this is not the first time they have dumped their sewage spilled mud. Also notice that algae growing on the water. That’s some fast growing algae.

UPDATE 6: Lots of commotion! Police, fire department, several TV news stations, newspaper reporters all showed up on the scene with traffic jams and flashing lights. Somewhere a woman sat alone in her living room laughing like a maniac.