This is from Tim Ruggiero regarding the most recent spill and other issues at Aruba Petroleum‘s operation on his property in the Barnett Shale.

Christine complained about the ‘bubbling pit’ to the TRRC today. TRRC said they will be sending someone out today, presumably top rated investigator friend of Aruba David ‘Finger’ Shreve. Nothing like a cold, wet and windy day to go walk through the muck to look at a pit and watch for bubbles.

Actually, Christine complained to the TRC last week about the bubbling pit and the venting that, according to Gil Brujano, P.E., Assistant Director Technical Permitting, Oil and Gas Division, Texas Railroad Commission, is not allowed when I questioned him at the Denton Town Hall meeting. It was only after her second request that the TRC decided to send someone out.

On Jan 11, I reported to the TRRC the condensate spill that involved thousands of gallons. Shreve came out that same day, and stuck his finger in one of the puddles and said it was ‘salty’. He also wrote a report that I received on Jan 25. He writes that the violation of SWR 8(d)(1) was observed:

“An area approx 33′ x 60′ of produced water-affected soil was observed near one of the frac tanks. The operator had constructed a soil berm to contain the fluid.“

-The berm was constructed AFTER the spill and as a result of the spill, and the operator’s friend implies an effort was made to at least contain the spill.

-The spill occurred in the early morning hours of Jan 9. I was told about it by a friend through a confidential source on the morning of Jan 11, and then I reported it to the TRRC. The spill was known by the operator, and still to this day, the operator has yet to report it to my wife or I. While the report that the berm was constructed to contain the spill is false, even if we assumed it true, it proves the operator knew of the spill. Need I remind anyone, the operator especially, that according to SWR 8 ANY spill, fire or accident must be reported IMMEDIATELY. I would like to point out, for the record, that this is the 2nd spill known to us, and we are the ones who reported both spills.

His report lists 3 action items, first word of the first instructions the word IMMEDIATE. It is in capital letters and underlined. 1) “IMMEDIATELY remove any free-standing produced fluids from the ground surface. (This has not been done)

2) Conduct excavation operations to vertically and horizontally delineate all areas affected by the produced fluids. (This has not been done)

3) Initiate and complete remedial clean up operations including turning, tilling and mixing soil for the produced water affected area to promote aeration and natural remediation. (This has not been done)

“A re-inspection of the lease is scheduled for the week of Feb 1. Failure to take the required actions by the re-inspection date will result in further Commission action.” Being that this was last week, and since no clean up or any efforts have been made by the operator in regards to the spill, I can only assume that either the TRRC inspected the site and found the clean up efforts satisfactory or that they did not re-inspect as they stated they would. I have not heard from the TRRC in this matter either way.

The TRRC, as I mentioned at the beginning, was to inspect the pit today. If, for some unknown reason that the spill area and clean up were not re-inspected last week, one would think that it would get done today upon inspection of the sludge pit.

Given the amount of rain we’ve received over the last two weeks- two inches alone overnight-is only causing this spill to leach further into the ground, and given the slope of the land, also to run off into parts of soil not previously affected. I would point out for the record that a great deal of this property is not mine, but my neighbor’s, who to this day, has also not been informed of the spill.

I’d like to read this tonight at the meeting. While it doesn’t have anything to do with an injection well, it does speak to the TRRC’s corruption, if not ineptness and lack of actual enforcement. In the event of a spill or accident at the injection site, we could probably expect a similar response. Lots of paper and talk, little action.

As a side note, the people of Era up north went to Austin to protest the proposed injection well in their small town. They were concerned about safety and their health. The TRRC ruled in favor of the operator, and soon after the well went in, there was an accident.

Yesterday, I took the following pictures that show oily run-off from the pit and the horrible mess at the drill site. You can see the oil sheen on the top and some of the run-off has a reddish tint just like the places in the pit where the most bubbling occurs. The run-off is flowing down to the creek. 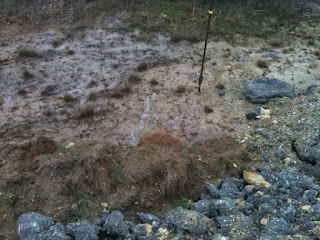 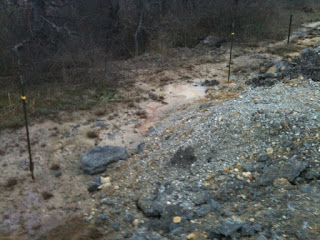 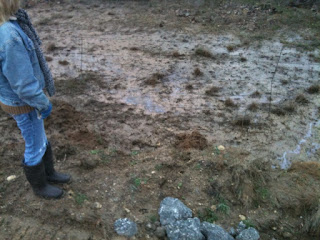 I think you should call the EPA Hotline! Enough with this ineptitude! The run-off from the pit and all the spills is clearly oily and it’s flowing into the creek. S.O.S to EPA