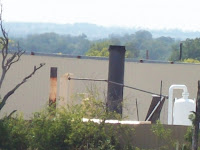 When TCEQ failed to respond to calls from Mayor Tillman requesting assistance with a strong odor, he called Wolf Eagle Environmental and requested an emergency air emissions test.

The methane was considerably higher this time around at 5.8 ppmv compared to 2.6 ppmv in the August test. No only is methane the most powerful greenhouse gas–20 times more powerful than CO2,–it is also an asphyxiant and is highly flammable

In regard to the recent Fort Worth air testing by TCEQ, I found the following sentence particularly pertinent.

A 24-hour monitoring can represent a clearer or true daily exposure to fugitive emissions from industrial processes rather than a grab sample or 1-hour monitoring.

In the Fort Worth Testing, a 15 second sample was taken. I didn’t see any disclaimer on this report either.

The bottom line from this emergency testing:

DISH Mayor called for emergency testing after the Texas Commission on Environmental Quality refuses to respond to complaints of toxic odors in this tiny community.

DISH, TX — On December 13, 2009 the tiny town of DISH, TX was overcome with noxious fumes omitted near a natural gas compressor station.

DISH is located in the epicenter of the Barnett Shale gas play and is home to a megacomplex of compressor stations, as well as pipelines, metering stations, gathering lines and gas wells. The mayor of DISH called out to the Railroad Commission of Texas, Texas Commission on Environmental Quality, and the operators of the compressor stations to get relief for the citizens of this tiny community. However, after hours of no response from the Railroad Commission of Texas, and refusal to respond to the complaint by the Texas Commission on Environmental Quality, Mayor Tillman called for emergency air sampling by Wolf Eagle Environmental. The results of the sample showed dangerous levels of carcinogens and nuerotoxins.
Laboratory results confirmed the presence of multiple volatile organic compounds including benzene, toluene, ethylbenzene, and o-xylenes. If you remember, DISH spent nearly 15% of its budget in August of 2009 for an air study after complaining for eighteen months to state regulatory agencies with no relief. The companies who have a stake in the compressor station include, Crosstex North Texas Gathering, Texas Midstream Gas Services (Chesapeake), Atmos Energy, Energy Transfer Company, and Enbridge Gathering. The latest report in its entirety is attached to this message for your convenience.

“Those who say it can not be done, should get out of the way of those that are doing it”