A new ProPublica article exposes deficiencies in oil and gas regulation and highlights Texas as the worst case scenario.

State Oil and Gas Regulators Are Spread Too Thin to Do Their Jobs
by Abrahm Lustgarten, ProPublica – December 30, 2009 12:38 pm EST

The imbalance between drilling growth and regulatory staffing levels could become a crucial factor as lawmakers and the public weigh how much environmental damage to expect in exchange for the benefits brought by the drilling boom.

This article is excellent in that it addresses all the areas where our regulatory body falls short.

You can read about the injection well example used in the article HERE. I’m sad to say that the conditions at this site have improved very little. Below is a picture taken in May, 2009. 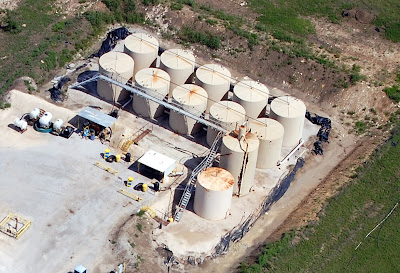 Update: To help further illustrate how lacking Texas regulation is:

Texas has NO regulation specific to hydraulic fracturing

Click over to see the pictures of an Aruba Petroleum drilling rig turning the air black with diesel fumes. The rig has a device that prevents this type of pollution but Aruba Petroleum refuses to make sure the device is installed on the rig. They are recklessly exposing residents to massive amounts of diesel fumes and there is no regulation to stop it. Aruba Petroleum refuses to stop the emissions voluntarily despite all the recent news that Shale Gas Drilling Harms Human Health. That’s hubris so thick you could cut it with a knife!