Spiritual leaders in the Barnett Shale use God
to excuse their greed.

The Southwestern Baptist Theological Seminary leased their minerals to Chesapeake who plans to drill up to 14 natural gas wells–closer than the recommended setback distance–next to an elementary school where children from low income households attend. A SBTS alumni wrote the seminary president requesting Environmental Justice for the low-income, multi-ethnic neighborhood near the seminary. The response from Paige Patterson, President, Southwestern Baptist Theological Seminary, is sickeningly manipulative and heartbreaking.

And Jesus went into the temple of God, and cast out all them that sold and bought in the temple, and overthrew the tables of the moneychangers, and the seats of them that sold doves, And said unto them, It is written, My house shall be called the house of prayer; but ye have made it a den of thieves. 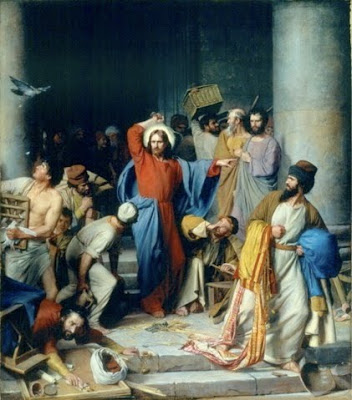 Casting out the money changers by Carl Heinrich Bloch.

I am writing you as a fellow Christian, as a Southern Baptist, as an alumnus (M.Div., 1994), and more importantly as a member of the community in Fort Worth where SWBTS is the “beacon on a hill”, literally and figuratively, for over a century now.

I simply want to draw your attention, as a fellow citizen and as a spiritual leader representing one of the most influential institutions in present day Christiandom and the world when considering the reach and influence that members of the SWBTS family/community have in every corner of the planet, to the growing community-wide concerns over the many issues related to gas drilling inside a densely populated urban environment in general and to the current discussion regarding plans to build an elementary school and community center complex right next to potentially dangerous gas wells just a block down the from Seminary Hill on Rosemont in particular.

I was taught in Sunday School, and was re-inforced at Southwestern, that we as human beings and believers are stewards of God’s creation who will be required to give an accounting on the Day of Judgment regarding our stewardship, especially our faithfulness in carrying out our moral and spiritual responsibilities.

This solemn recognition combined with my high regard for the seminary as a bedrock institution in our local community and my respect for your official position and your spiritual and moral authority led me to write and respectfully ask you to look into these very real life and death issues. Then if/when appropriate, I urge you to lend a clear “prophetic voice” and needed leadership and moral guidance for the decisions and policies that impact a multitude of precious souls, including many from the Southwestern community/family.

The issues that I am pointing out are not , and should not, be restricted to the political arena because they transcend political differences. Please consider and pray about the issues and their impact on people’s health and safety, many of these neighbors are precious children and among “the least of these”. I look forward to seeing the light and love of Christ shine warmly on our community from Seminary Hill, sooner than later, President Patterson.

The response from President Patterson:

Thank you for your inquiry about the seminary and its involvement in the Barnett shale.

The seminary is not a player in the issue of the elementary school. That is a matter that relates to the city and to the school district. We are happy to provide a venue for discussions to take place, but we are not involved in the decision in any way.

As it regards your request that the seminary desist from drilling and cost itself large sums of money that the Lord has generally made available to us, you would have to be able to prove that the prosecution of those wells would endanger someone. The city, the company, and the seminary have been diligent to satisfy themselves that there is no significant danger visited on the community. Thank you for your interest.

President Patterson has forgotten some of Jesus’ most important teachings. Please, dear readers, help me remind him. Here are mine:

The King will reply, ‘I tell you the truth, whatever you did for one of the least of these brothers of mine, you did for me.’

— Matthew 25:40
Again I tell you, it is easier for a camel to go through the eye of a needle than for a rich man to enter the kingdom of God.”