News from Independent Oil and Gas Association of New York

IOGA of NY Press Statement on Spill at Gas-Drilling Site in Dimock, PA

“On behalf of members the Independent Oil and Gas Association of New York, we are deeply concerned with the incident that occurred, in Dimock, Pennsylvania yesterday (September 17, 2009). It is our understanding that the spill resulted from a decoupling [TWICE?] of a water line, which contained “slick water”. Slick water is comprised of 99.5 percent water and sand and is not considered a toxic substance. The Pennsylvania DEP has been on hand and is satisfied with the remediation being completed.

Eureka! According to the last reports, the DEP was still trying to figure out what is in the chemical spill so can give the bad news to the people who’s well water might be affected.

The incident in Dimock is indeed regrettable and unfortunate. It is important to note that this circumstance should not be viewed as representative of members’ work and experience day-to-day. Such incidents as the spill in Dimock are quiet rare, and natural gas exploration has been conducted safely and in an environmentally sound manner for decades in New York. Our companies have worked very, very hard to work in conscientious concern for the environment – due in large measure to very rigorous oversight by NYSDEC – and we will continue to do so. We live and work in New York too.

“Such incidents are rare?” Eureka! That’s just not true! I can’t even keep track of all the Cabot spills in Dimock alone. 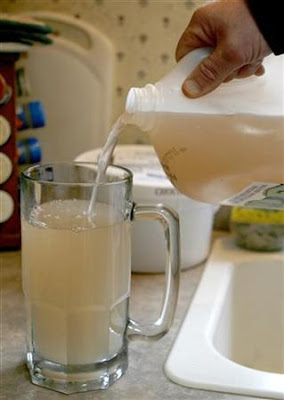 U.S. finds water polluted near gas-drilling sites A Dimock, Pennsylvania resident who did not want to be identified pours a glass of water taken from his well after the start of natural gas drilling in Dimock, Pennsylvania, March 7, 2009. REUTERS/Tim Shaffer

We stand steadfast in our conviction that natural gas exploration can be facilitated in a safe and environmentally friendly manner. In days to come, IOGA of NY is looking forward to the Department of Environmental Conservation’s issuance of a generic environmental impact statement that will guide Marcellus development. And as we have done in the past, our companies will comply with all regulations and permit requirements.”

WYOMING! from JOSHFOX on Vimeo.

They won’t have any test results until next week but they are calling the chemicals spill hazardous volatile organic compounds which could be stuff like benzene or formaldehyde… So far the spill has killed some “small aquatic” animals.

Please note: The well is operated by Cabot who contracted Halliburton to do the fracking.