The drilling crew at a Chesapeake well site in Louisiana was “injecting fluids at high pressure to break down the shale and release natural gas,” when some cattle ingested the fluid and died. 19 16 (edit) of the cattle died.

That sure sounds a lot like hydraulic fracturing. In 2005, at the urging of Dick Cheney, former Halliburton CEO, Congress exempt fracing from the Safe Drinking Water Act (SDWA) as part of the Energy Policy Act of 2005. It’s way past time to repeal that exemption! LINK to EXAMPLE resolutions your group, municipality, county, etc. can adopt asking our legislature to remove the exemption.

But, there’s no need to worry because the industry tells us that hydraulic fracturing is perfectly safe and never, ever contaminates any water and it’s really precise except for when it’s imprecise.

UPDATE: First person account HERE. I got word that the death toll is now up to 30 but that’s unconfirmed. 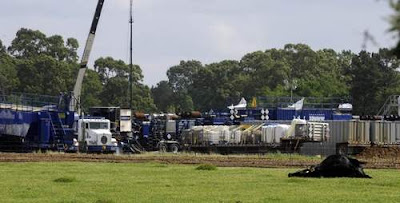 An animal lies near the drilling site where at least 18 cows died Tuesdayevening
in a pasture next to a Chesapeake Energy Corp. drilling site in Caddo Parish. (Jim Hudelson/The Times)

DEQ: ‘Nobody is owning up to it’

…investigators found white, milky puddles here and there both on the well site and in a 400 square-yard area just inside the pasture.
…
The livestock died Tuesday near rain puddles in their pasture, said a Caddo Parish sheriff’s spokeswoman, Cindy Chadwick. Local residents reported the cattle were foaming at the mouth, bellowing and had bleeding tongues.
…
“The cows’ tongues hanging, bleeding off front and back, foaming at the mouth and bellowing” she said.

William Dubose said he captured video of yellowish-green fumes that smelled like a combination of antifreeze and petrochemical.

Antifreeze just happens to be one of the chemicals in frack fluid.

This is not an isolated case. One of the Wise County Commissioners lost a calf because it got in a spill on his land, in Freestone County several cattle died so the gas company paid the owner and hushed him up. There are many such cases if you dig around a little bit.

If it does that to cattle, imagine what will happen to people. Oh, HERE’s what.

Scientists studying residents living in a 1970s era housing development built atop a retired oil field waste pit found an extraordinarily high incidence of lupus, an autoimmune disease. Researchers calculated that the rate was 30 to 99 times higher in people living in this six-block area of Hobbs, NM, than what would be expected in the general population.

Drink up! Eat up!

Apparently we will never learn whodunnit.