This should serve as a warning for residents in the Marcellus Shale and especially in the Haynesville Shale area where Chesapeake wants to drill inside a public park.

The Trinity Trees area was an eight-acre grove of old-growth trees located in Fort Worth along the Trinity River Hike and Bike Trail just upstream from the Rogers Road bridge. Thousands of trail users have enjoyed this peaceful slice of nature for years. Many believed this to be the most beautiful wooded area along the entire trail system.

With the trail winding through the grove, park benches, and tax-funded maintenance, many assumed this parcel of land was a public park. But, in fact, it was private property and was purchased by Chesapeake Energy in January 2007 for a gas well drilling pad site.

Many in the community responded in opposition to Chesapeake’s plans and formed the Trinity Trees coalition that spread the word about potential damage to the grove of trees. Although the entire eight acres were not preserved, it is important to note that the diligent efforts of the Trinity Trees supporters did get the attention of Chesapeake and the City of Fort Worth. The awareness of the potential negative impacts of urban gas drilling on the quality of life of the community has been greatly increased. The City of Fort Worth is considering revisiting its gas drilling ordinance.

The following video proves, again, that Chesapeake doesn’t keep their word, even when it’s in writing.

Producers can and should use Green Completions to prevent air pollution and waster hydrocarbons that could be used for energy. S.B. 902 written by Wendy Davis places restrictions on release of gas in air and would require Green Completions. S.B. 902 is currently under consideration by the Natural Resources Committee. Please contact committee members and urge them to support this bill in its entirety.

Via email: Flaring near an apartment complex in Ohio (click to enlarge) 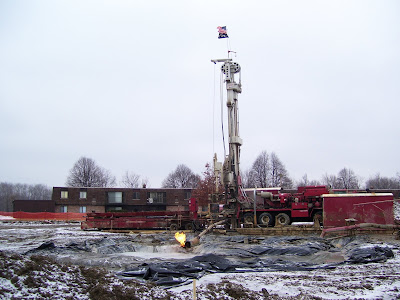