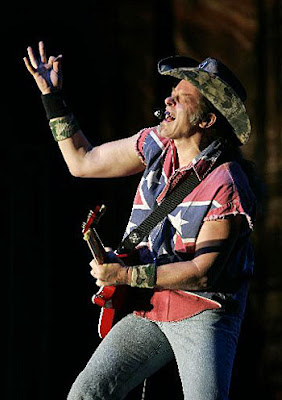 Some of those in attendance said they were put off by the rocker’s use of faux machine guns as props, his Confederate battle flag shirt and unspecified remarks he made about non-English speakers. The performance came hours after Mr. Perry spoke of bipartisanship, compassion for the poor, and racial and class unity at his swearing-in.

All Governor Good Hair’s spokesman had to say when questioned about the behavior was that Nugent was a good friend of the Governor.

One civil rights leader’s reaction: “Whenever someone sports the Confederate battle flag, many Texans will be offended, and rightly so, because of what it symbolizes – the enslavement of African-Americans and more recently the symbol of hate groups and terrorists,” said Gary Bledsoe, president of the Texas NAACP.

This is horribly embarrassing for Texans. I think we should all write letters to Governor Good Hair and let him know how repugnant we find this behavior.