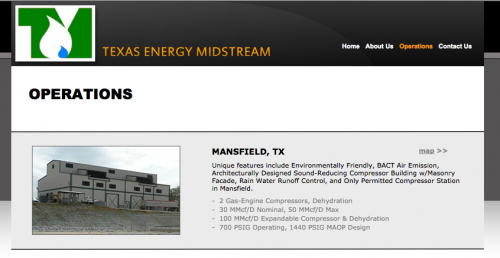 You will need to read that post to get caught up. But the short story is a neighborhood in Mansfield woke up with an oily substance on everything, even the ducks. The ducks evacuated. The industry tried to blame it on pickles.

Here’s the update from a resident:

So …TCEQ records requests produced a lead showing that Texas Energy Midstream (TEM) was asked by TCEQ to keep a tracking system of maintenance issues in a previous year, logic would lead one to believe that if there was a maintenance issue or work done or a blowdown around this time frame it would be recorded. Nope. I asked TCEQ to request that from them. TEM point blank said we have nothing for you. TCEQ seemed fine with that.

TEM shortly there after sold the station to Summit. Being we had had problems in the past Summit decided to actually be transparent with the community. When they took over they now tell us in advance of any work to be done so as not to startle anyone with noise. They listened to us when we said that we can smell emissions and installed a thermal oxidizer flare unit that virtually eliminated the smell and burns off almost all of the raw emissions.

And here is the best part. The station was in such neglect and rough shape and they had to do 6 truckloads of soil removal and remediation from leaks. Leaks were so bad Oil and substances were backing up so much they were coming out of the emergency vent stack when they took the place over.

Mystery solved . All TCEQ had to do was look and they stonewalled all of those requests.

TCEQ lab tape lift confirmed that it was unknown substance and black and metal particles could have come from an industrial source. The only industrial source for miles around was right there 600 ft away, but they didn’t seem to notice or investigate it. The pickle people 2 miles away said there were no pickle tank explosions that week nor any debris across the roads or on the windows of schools it would have to pass that are between them and us.

The pickles where found not guilty.