Another great article by Fort Worth Weekly that illustrates how the industry has no real plan for disposal of the massive amounts of toxic waste generated by natural gas extraction.

Pandora’s Wells
Do you know what’s going down that disposal well near you?
Wednesday, 24 February by GAYLE REAVES 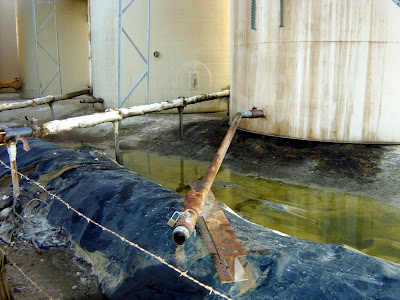 An Injection Well, Up Close and Personal: This photo, taken Oct. 5, 2007, is of an underground injection disposal well site just north of the Wise/Montague County line, that had passed the state’s Railroad Commission’s inspection eight days earlier. Sixty-one days later, inspectors returned after a resident complained of spilled oil, overflowing dikes and green-colored fluid in standing puddles. The well site was found to have several violations.