Since 2007, methane levels have been on the rise causing “vicious” cycles in global warming and NPR wonders about the source of this methane.

Molecule for molecule, methane is much more effective than carbon dioxide at trapping heat in the atmosphere. And that’s just part of the trouble.

“Methane is much more complicated once it gets into the atmosphere than something like carbon dioxide is,” Shindell says, “and that’s because it reacts with a lot of different important chemicals.”

Texas does not measure methane or have any restrictions for methane in the air. If we did, we would be one gassy state.

Companies in the Barnett Shale still vent and flare which releases methane and toxins into the air and is completely unnecessary as stated by Devon Energy.

Most have done nothing to prevent fugitive emissions at their facilities although the technology is available and affordable.

Pressure builds up at compressor stations which causes the relief valve to open releasing approximately 100 million cubic feet of methane into the air with each release otherwise the facility blows up.

People thought the level of methane in DISH, Texas was high in August 2009 at 2.6 ppmv. The most recent tests conducted in December showed methane levels are rising at 5.8 ppmv. No wonder…

Methane is increasing in our atmosphere from many sources and, as our climate warms, the methane releases will increase even more. It is reckless to allow the oil and gas industry to continue releasing massive quantities of methane into the air when it can easily be prevented. 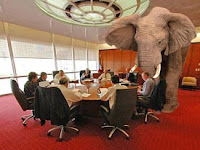 Hey, NPR, there’s an elephant in the room passing gas!