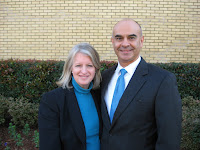 Rick and Melissa Noriega. These two Houston Democrats could easily be called Texas’ new Political Power Couple. Melissa Noriega made news early this year with her run for the Houston City Council seat vacated by Shelley Sekula-Gibbs, who resigned the seat to assume the last six weeks of former Congressman Tom DeLay’s term in 2006. Through a special election, a runoff, and a general election battle to win the seat for a full term, Melissa Noriega’s progressive message endeared her to Houston voters, earned her statewide media recognition, and helped mark her as part of a new generation of progressive leaders with statewide potential. Rick Noriega’s story is one that is also well known. A veteran of the “War on Terror,” Rick Noriega started generating buzz early in 2007 as a number of progressive Netroots activists and bricks-and-mortar Democratic activists created a movement to “draft” Noriega into the Democratic Party’s race for United States Senate. Rick Noriega answered the call to service and threw his hat into the ring to take on John Cornyn and the Texas Republican machine in the 2008 election in spite of the fact that he could have easily won reelection to his seat in the Texas Legislature or even run for another office where the fight would have been small to none. Instead, he had the courage to stand up for all Texans and say enough is enough. A true people-powered candidate, Rick Noriega, along with Melissa Noriega, have both made significant sacrifices to serve the people of Texas. For this and many other reasons, the Texas Progressive Alliance is pleased to recognize Rick and Melissa Noriega among its 2007 Gold Stars.