Over 200 Iraqi civilians dead and at least 300 injured in bomb attacks yesterday.

They won’t know the total death toll for a few more days. 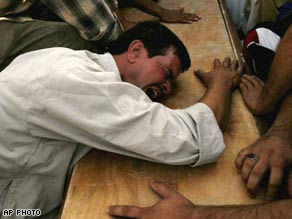 And this about the surge

BAGHDAD — Despite U.S. claims that violence is down in the Iraqi capital, U.S. military officers are offering a bleak picture of Iraq’s future, saying they’ve yet to see any signs of reconciliation between Sunni and Shiite Muslims despite the drop in violence.

Without reconciliation, the military officers say, any decline in violence will be temporary and bloodshed could return to previous levels as soon as the U.S. military cuts back its campaign against insurgent attacks.