There he is giving us the thumbs-up from Chicken Express. 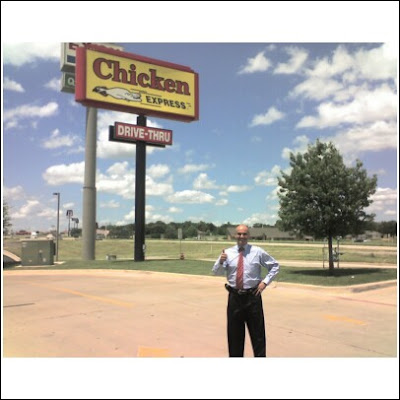 Yes, Rick Noriega was in Wise County recently. It was a quick trip through and, unfortunately, no Wise County Democrats were there to meet with him but he wants us to know that he loves Wise County.

Rick Noriega wants to answer the call to serve! That’s why he enlisted in the U.S. Army Reserves during the Iran hostage crisis. Thirty years later he served in Afghanistan as a Lieutenant Colonel in the Texas Army National Guard.

When he was just barely back from Afghanistan at the request of Mayor Bill White, Rick Noriega served again working 20-hour shifts commanding a shelter that housed thousands of flood victims from New Orleans.

Join the Noriega Express! Draft Rick Noriega for U.S. Senator for Texas in 2008!

Show your support by making a donation Even a small donation is important. Show that grassroots Texans support Rick Noriega!