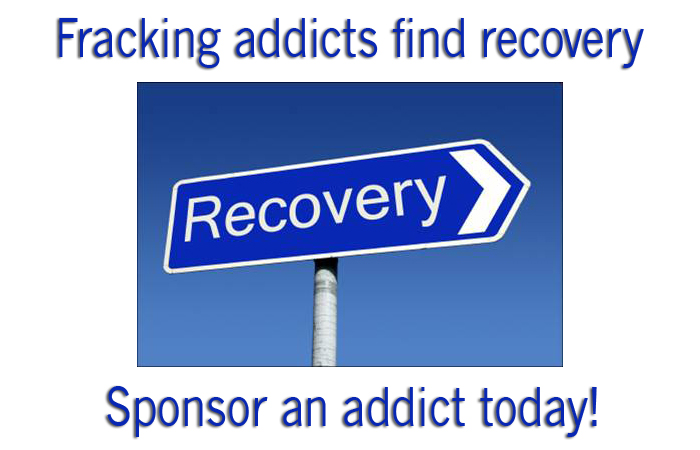 I received the nicest letter today from a self-described fracking addict. This letter will keep me going for a long time. Some of my very best friends are recovering fracking addicts.

Letter from a recovering pro-fracking addict.

Hello. My name is Hunter Bonner and I was a resident of the City of Denton, TX from 2004 – 2014. My name may or may not sound familiar to you, but on many occasions, I have engaged discussions with you all via social media, and specifically Twitter on the subject of gas well fracking.

Many of these discussions would center around not only the subject of gas well fracking, but more recently, the push for a fracking ban in the City of Denton. I took on the position that while I “understood” the dangers that are associated with the natural gas industry, that mineral rights owners still had a “right” to their mineral royalties. Also, I frankly chided not only yourself, but FrackFree Denton folks for pushing for the ban citing that you were “overstepping” your authority on local control and regulation.

Then I did my own research. To put it very bluntly, I was shocked beyond belief. People actually being able to light their tap water faucets on fire, rivers with massive fish kills, and wildlife of all sorts that had died due to the contamination of the water supply due to gas well fracking. But most disturbing was hearing the stories of how people of all ages not only got sick from the water contamination, but that some had actually died due to illnesses brought on by the chemicals that had been injected into the ground.

Probably the biggest thing that struck me to my core was seeing this devastation brought on by these companies, that they would outright lie to people’s faces, lie to lawmakers and pretty much challenged you to prove them wrong whenever they would screw up someone’s life with them contaminating someone’s drinking water. To learn that the very companies that stand to profit from the gas drilling business, conducting their own “studies” that would state their was no danger to the water supply, but at the same time would read off a mile long list of chemicals that I cannot even pronounce and that all were considered toxic. The brazenness of the lying got me highly upset. But really, the person I was most upset with was myself.

To give some background, I am what most people would call a “Conservative” from a political point of view. I believe in G-d, anti-abortion, limited government, free markets, and until recently, support domestic production of our energy resources by any means necessary. On the last one I still support this, but I have come to realize that there has to be a better way than injecting toxic chemicals into the soil and putting the public at a major health risk. I would even go so far as to admit that prior to my research, that deep down I knew that there is something inherently unhealthy about injecting chemicals into the ground where we grow our food and get water from. I did not publicly admit this for fear of being labeled an “environmentalist” or “left wing nut-job.” I now realize, that this was, and is, wrong thinking. Worst of all, I elected the very politicians that have given a free pass to the petroleum and natural gas companies that are doing all of this.

The purpose of this letter is to say that first, I apologize to you, FrackFree Denton, and Earthworks for my ignorant chastisement of your position on gas well fracking. Second, I hope that my story can serve as some sort of example to other Conservatives, that they are not left wing nut-jobs just because they desire clean drinking water. Finally, I want you all to know that the work your organization performs, does in fact make a difference with people like me. People who think they “understand” what gas well fracking is all about, but really have not a clue about it. To say the least, my eyes have definitely been opened!

So what is next for a Conservative like me to do you may ask? The answer is simple: Pressure my elected leaders in Congress to finally be serious about the Frac Act, and not let it die in committee like it has several times in the past. That means, going against the grain of the Republican Party, and really, any party platform that desires to give gas well companies a free pass on contaminating the water. I now understand why the frack ban vote passed so well in Denton along both party lines. A clean water supply is a non-partisan issue. Anyone who disagrees with that either is getting a payoff from the polluters, or is incapable of common sense approach to environmental issues.

If this letter was too long I apologize for that. However, I did want to share my complete thoughts on this matter, and I sincerely believe that all of you deserved this apology and admission of mine.

Thank you for your time.

P.S. Should you want to publish my letter on your blog, either via Bluedaze, FrackFree Denton, or Earthworks, I give full permission to do so. People need to wake up.

And this is a comment from the Denton Record Chronicle, which you need to read the comment thread to understand that the wing nut comment was in jest.

I didn’t read all the letters condemning Myra Crownover and the Texas Legislature over HB 40. Suffice to say, after conducting some research into the whole fracking thing, I am publicly, and unashamedly declaring that my previous positions on Natural Gas Well Fracking, and support of HB 40, were and are completely wrong.

I am also declaring that you can be a Conservative politically, and do not instantly become a “left wing nut-job” simply because you desire clean drinking water, and you think that gas and oil companies lying to the faces of people, Congress, etc and politicians taking money from said companies in exchange for votes is wrong.

My name is Hunter Bonner, and I am a recovering ProFracking addict. I only request mercy and understanding.

When fracking first started in Texas, I didn’t know anyone who was against it. People learn. We make new friends and discover that we are more alike than different. We are a huge family.