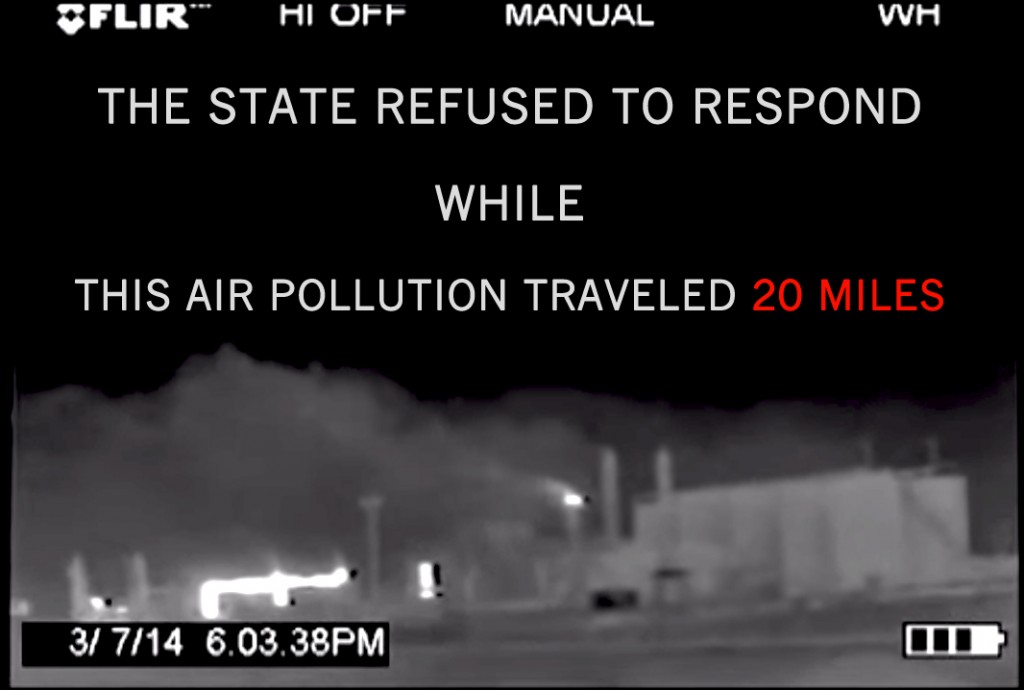 Oil and gas has taken over Texas and no one is coming to help.

The amount of air pollution boiling out scared me!

Marathon’s Sugarhorn facility is a chronic offender so I knew I would see emissions. I always see emissions at the Sugarhorn. But I was not prepared for what I saw that day in Karnes County as I looked through the FLIR camera.

I immediately called the TCEQ for help.

I remember, as a child, watching disasters play out on TV. When there was a disaster, the government showed up to help people. I was comforted by that. I grew up believing that bad things might happen but someone would come.

There is a disaster in progress and no one is coming. With HB 40, the Texas Legislature intends to turn over every Texas neighborhood to fracking. We must stop waiting for help to come and find a way to help ourselves.

State regulators take no action while residents and climate suffer from ongoing emissions.

No one was home when I called the TCEQ on March 6, 2014, to report the massive release. The nice young man on the phone told me they were all in a workshop that day. He promised to have someone call me. No one called.

When I returned to the Sugarhorn the next day, the release was worse. I called the nice young man again. He immediately recognized me and asked me to hold.

TCEQ Region 13 Air Section Manager, George Ortiz, got on the line. I described what I was seeing and expressed my fear that something was terribly wrong. He already knew that I lived in Allen, Texas, a fact I had not disclosed to the nice young man. Ortiz refused to investigate the event.

I was there at the behest of the people who live near the Sugarhorn. They feel the state is not responsive to their complaints. They are suffering life altering health impacts. Marathon’s Sugarhorn is a chronic and serious offender. Yet, the TCEQ refused to investigate because I am not a resident.

If a traveler reports a robbery while passing through a town, are the police obligated to respond? Or, does the thief get away?

My job is helping people and it’s a great job. I’ve been trying to help the people in Karnes for several years but there has been no improvement in their lives. That’s a bitter pill for them and for me.

I’m a stubborn woman. “Bullheaded” is the term my mother used. On my resume, I list “tenacious” as a strength. I am determined this state malfeasance will be exposed. In the meanwhile, the Texas Legislature plans to mandate that all Texans welcome fracking to their backyards with H.B. 40. They are placing the health and safety of all Texans in the hands of the oil and gas industry.

TCEQ dismisses any exposures by claiming they were only a short-term exposure so no toxicological impacts are expected. We now have nearly 2 years worth of videos and other data to show these emissions are significant and ongoing. The residents have received long-term exposure.

The most recent canister sample showed benzene 10 times over the long-term limit.

The major effect of benzene from long-term exposure is on the blood. (Long-term exposure means exposure of a year or more.) Benzene causes harmful effects on the bone marrow and can cause a decrease in red blood cells, leading to anemia. It can also cause excessive bleeding and can affect the immune system, increasing the chance for infection.

“A TCEQ spokesman went on to criticize the methodology employed by Shale Test, stating “it is not scientifically appropriate” to compare short-term test results against long-term thresholds.”

TCEQ bolsters their position by refusing to take air samples or even investigate.

The Air Pollution that Traveled 20 Miles.

A professor from Texas A&M contacted me several months after my visit to Karnes. He knew I was working with residents in Karnes and wondered if a video of a release or malfunctioning flare might exist. He said there was a spike of hydrocarbons on the TCEQ air monitor around March 6th. The air monitor is in Floresville, over 20 miles from the facility in Karnes. MAP

Well yes! Such a video does exist.

Dr. Gunnar Shade is a chemist at Texas A&M. He can fingerprint the emissions that spike on the TCEQ air monitors. 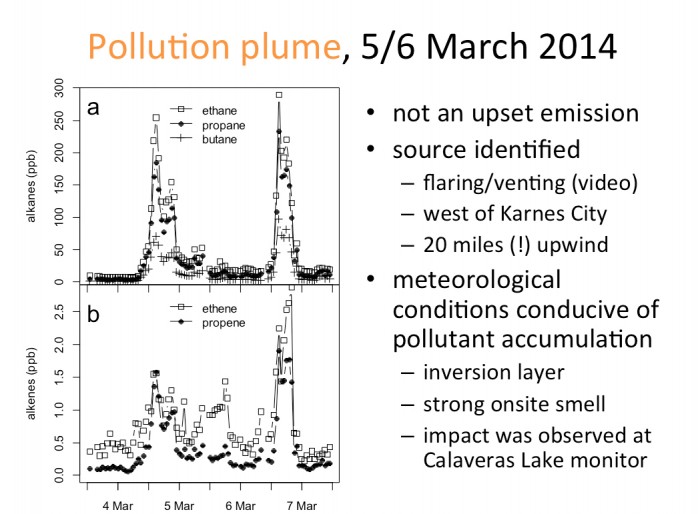 This “business as usual” is not only bad news for everyone downwind, it’s also bad news for the planet. Methane is the most powerful Greenhouse Gas, 86 times more powerful than CO2. Actual measurements show that methane levels in our atmosphere are way too high. Methane concentrations in our atmosphere have skyrocketed from 400 ppb to 1800 ppb. We need to stop methane releases.