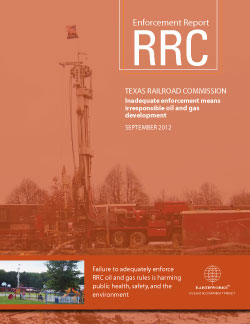 “Texas’s enforcement of state oil and gas rules is broken,” said Earthworks’ Senior Staff Attorney Bruce Baizel. He continued, “In Texas and across the country, public health and safety are at risk because states are failing to uphold the rule of law. Until Texas can guarantee they are adequately enforcing their own rules on an ongoing basis, the state must not permit new drilling.”

As recounted in the separate Texas-specific analysis, failure to enforce oil and gas regulations means that Texas is not seeking, documenting, sanctioning, deterring, and cleaning up problems associated with irresponsible oil and gas operations such as chemical spills, equipment failure, accidents, and discharges into drinking water supplies

Among the study’s findings —

“This report underscores what landowners all over Texas already know,” said Dan Boggs, president of Gardendale Accountability Project. He continued, “The impotence by design of TCEQ and the Railroad Commission allows oil and gas companies to ignore the sparse guidelines already in existence.  Legislators must end their dereliction of duty and reform TCEQ and the Railroad Commission now.”

Drawn from both the data analysis and the stakeholder interviews, the report makes numerous common sense policy and regulatory recommendations to address the enforcement crisis, including —

Breaking All the Rules: The Crisis in Oil & Gas Regulatory Enforcement (executive summary)

Earthworks, and its Oil & Gas Accountability Project (OGAP), is dedicated to protecting communities and the environment from the impacts of irresponsible mineral and energy development while seeking sustainable solutions.