During the question-and-answer portion of the forum, Hall was asked a question about contributions he received from pro-toll road interests as a San Antonio City Councilman, specifically contributions from H.B. Zachry, a Texas-based company that teamed with Cintra, a Spanish Company, to develop the first stage of the Trans-Texas Corridor, and whether or not he supported the Trans-Texas Corridor.

Hall never answered the question about the Trans-Texas Corridor, but defended the contributions he received from the Zachry family and launched into a lengthy litany about being escorted to the home of a San Antonio millionaire while running for Mayor of that city, and being offered a $10,000 contribution he refused to take.

In addition, Hall was also asked during the forum if he believed it constituted a conflict of interest that his wife, Stephanie Hall, is an attorney for Valero Energy. Hall replied that he had contacted Valero and was told it was not a conflict of interest because his wife’s work dealt mainly with the company’s international affairs. 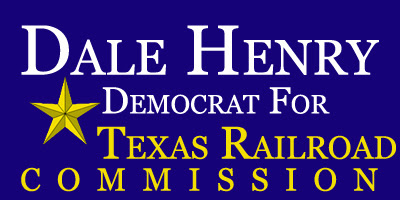 We need someone on OUR side for Railroad Commissioner

It’s not just me!

Art Hall and a real conflict of interest

Let me first state that despite his age and his lack of skill as a politico, I’m voting for Dale Henry for RR Commissioner. He knows the oil and gas industry from the ground up and will do an excellent job both for industry and consumers. The RR Commission regulates the oil and gas industry in Texas and we’ve had nothing but industry rubber stamps on it. It’s time that we have someone there who’ll actually do a good job for Texans and our environment.

That said, I didn’t have much of problem with his opponent. Until now. Last night in Decatur, during a candidate forum, Art Hall was asked a direct question about a possible conflict of interest should he win. Specifically, he was asked if it was a conflict of interest for his wife to work for Valero Energy, one of the companies he would be regulating if elected. He stated that it wasn’t and he knew it wasn’t because he contacted Valero and asked them.

Wait… Art, you contacted Valero and asked them, the company you’d be regulating, if it was a conflict of interest?

Hall is a bright guy so I’m going to give him the benefit of the doubt and say it wasn’t an issue of a lack of knowledge. So, then what was it? What is the explanation for contacting the wolf about whether or not it was OK to allow them to eat the sheep? Was it so easy to accept that her job (working on international issues for Valero) wouldn’t be at risk should you vote the wrong way?