Have you ever noticed that things start moving when wealthy people are affected?

TCEQ is meeting with the larger Barnett Shale producers to say, “Pretty please stop exposing the public to high levels of benzene.” The larger producers are either saying, “It’s them, not us!” or, “We need more data.” Affordable technology exists to prevent most of the emissions but industry wants a pass to pollute as long as possible.

State is asking Barnett Shale drillers to voluntarily cut air pollution
Air samples showed significant levels of benzene in several locations. One sample taken downwind from a tank seven miles west of DISH showed a level of 1,000 parts per billion, which is more than five times the commission’s short-term exposure limit of 180 parts per billion.

That level is the equivalent of a person sniffing a can of gasoline, and it shows the need for more tests, including long-term sampling, Honeycutt said. A sample at another site found benzene at 500 parts per billion. Long-term exposure to benzene — a year or more — can lead to health problems including anemia, immune disorders and leukemia.

As Mike Lee’s article points out, benzene is not the only toxin of concern. Dr. Colborn says the neurotoxins are more dangerous than the benzene. And, as my pictures and videos have shown, the smaller producers under the cover of darkness and way out in the country are MUCH worse than the larger producers who have more eyes watching.

TCEQ’s Honeycutt thinks the “find and fix” method will control the emissions faster but no one looks much in Wise County even though Wise County has the highest levels of VOC’s in the Barnett Shale. VOCs = benzene! 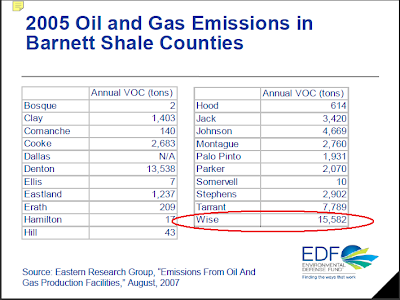 Benzene also comes from the diesel exhaust not just the condensate tanks.