Below is an excerpt from a beautifully written commentary by a single mother who wonders what her daughter’s world will be:

Such signs do not portend well for the future, and I wonder if my own daughter—three years old now—will grow up believing Colorado’s mountain snows were always red in the spring. Given her curious nature, I know she will challenge me when I say it wasn’t always so—and I imagine she will also ask why we did nothing, even when the signs of change were so obvious before us.

In her commentary she mentions the latest findings by MIT?

In May, the Massachusetts Institute of Technology announced that without “rapid and massive action” climate change will be at least twice as severe as predicted six years ago—that means a median probability of surface warming of 5.2 degrees Celsius by 2100. The U.S. Global Research Program also released its first comprehensive report on the issue; key findings show changes are already underway across the United States—and their impacts are expected to increase.

Click on over and read the rest, then spend some time thinking about what’s really important in life and whom you should believe. 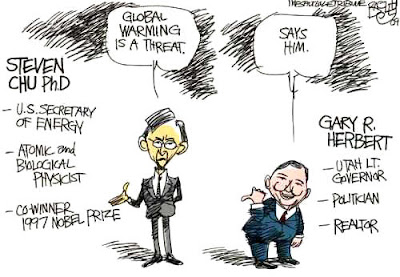 I can’t help but relate this cartoon to the study of Barnett Shale Emissions done by Dr. Al Armendariz, who is a scientist and the ridiculous rebuttal of that study by Ed Ireland who is a shill for Big Gas. Guess who turned out to be right.